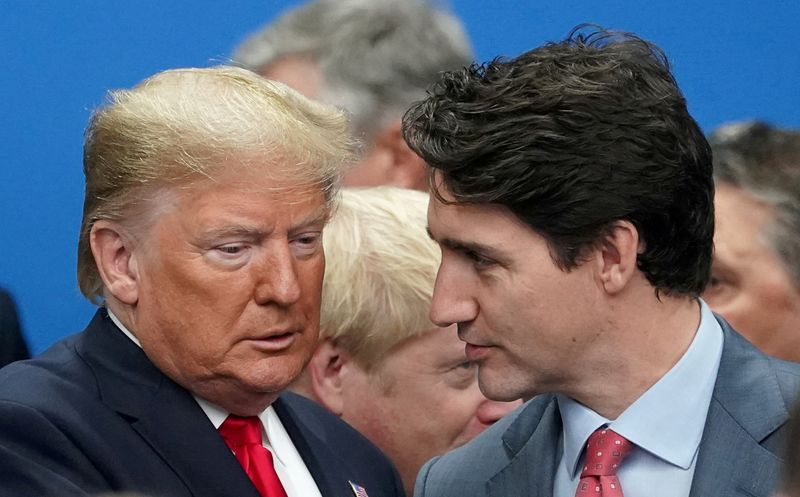 © Reuters. FILE PHOTO: Trump and Trudeau meet at the NATO summit in Watford

OTTAWA (Reuters) – Canada on Saturday blocked bulk exports of prescription drugs if they would create a shortage at home, in response to outgoing U.S. President Donald Trump’s efforts to allow imports from Canada to lower some drug prices for Americans.

“Certain drugs intended for the Canadian market are prohibited from being distributed for consumption outside of Canada if that sale would cause or worsen a drug shortage,” Health Minister Patty Hajdu said in a statement.

“Companies will now also be required to provide information to assess existing or potential shortages, when requested, and within 24 hours if there is a serious or imminent health risk,” the statement said.

The Canadian measure went into effect on Friday, just days before a U.S. “Importation Prescription Drugs” rule that would eventually allow licensed U.S. pharmacists or wholesalers to import in bulk certain prescription drugs intended for the Canadian market.

Neither the White House nor the Department of Health and Human Services had an immediate response to a request for comment.

Trump touted the plan in his first debate with President-elect Joe Biden, who has also said during his campaign that he would set up a similar import plan to try to reduce prescription drug costs for Americans.

“Canada is a small market, representing 2% of global drug sales, that sources 68% of its drugs internationally. The need for vigilance in maintaining the national drug supply continues,” the statement said.

Canadian Prime Minister Justin Trudeau said in September he was willing to help other nations with pharmaceutical supplies if possible, adding that his priority was protecting the needs of Canadians.

Many of Canada’s drug suppliers opposed Trump’s plan, saying it could lead to shortages.

By Patrick Werr CAIRO (Reuters) – Inflation in Sudan has risen to one of the highest levels in the world, and the country risks slipping into hyperinflation unless it gets its…

LONDON (Reuters) – Brexit trade negotiations with the European Union are in a reasonable position, with some progress on competition issues but significant differences outstanding…

From small businesses to farmers, middle India is driving demand
By Reuters – Nov 28, 2020